For Brian photography is an escape, a way to explore the world, studying every detail of the simple things. It gives him an opportunity to find beauty in unexpected places and in all walks of life. It forces him to challenge and push the bounds of his comfort zone, enabling him to grow as a person and as an artist. Over the years he has explored a wide range of photographic narratives while remaining loyal to his black and white roots

Brian has had a number of notable accomplishments which include a few international contests, features in publications, art shows, galleries, and large commissioned projects. These accomplishments only help fuel the fire that keeps him going.

I am constantly creating 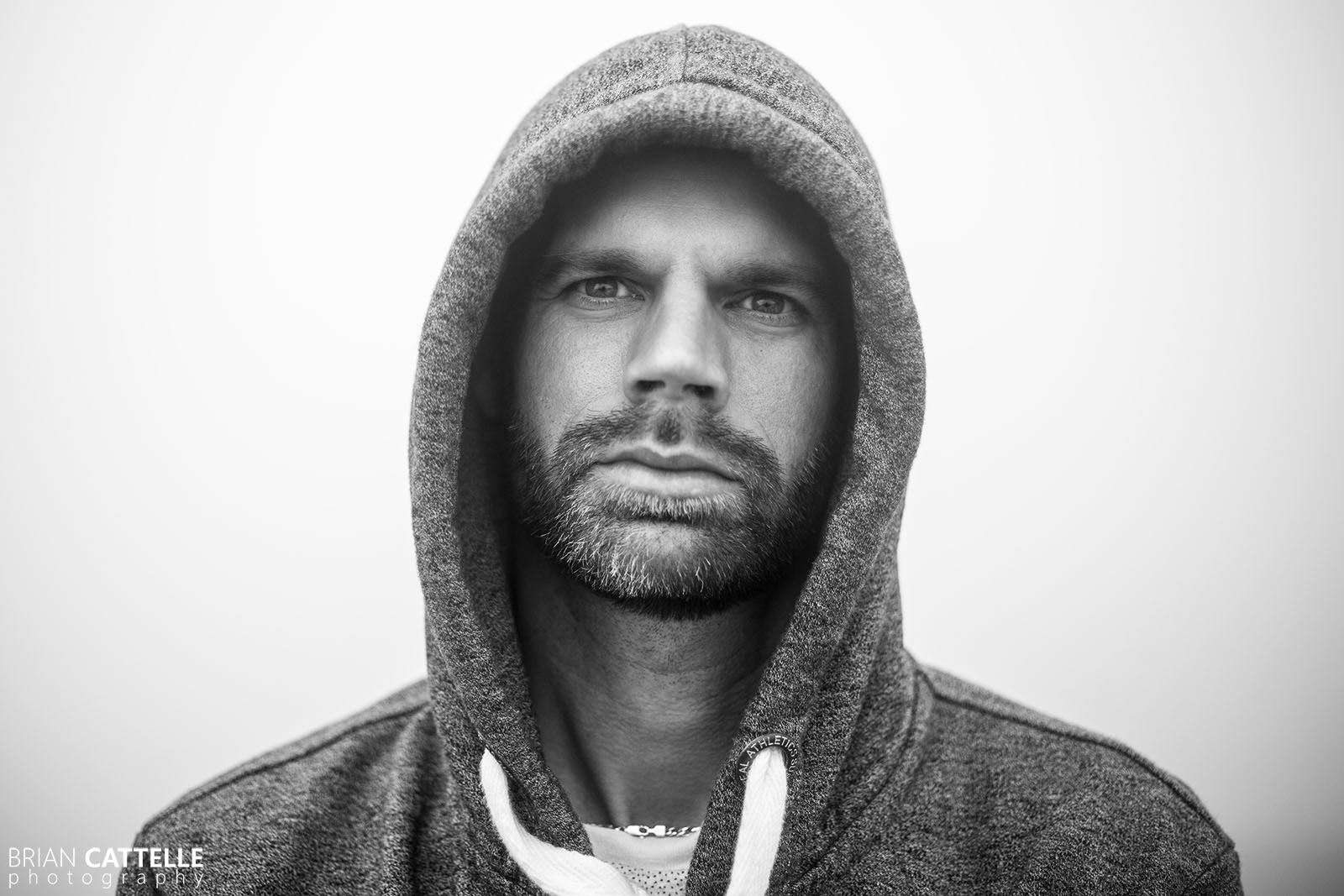 Photographer
My name is Brian Cattelle.  My life has revolved around photography since my early teens.  I remember developing my first black and white photo in my high school darkroom – the ominous red glow of the light, the stink of chemicals, the trickling water in the background, and the anticipation as, moment by moment, my picture materialized.  From then on I was hooked. During high school and college, I had the luxury of fully equipped dark rooms, but my circumstances changed after college.  I strayed away from photography for a few years.  Then one day, I found myself behind the lens of a decent camera again, and it was like being reunited with an old friend. Once again I was hooked and hooked I remain.  This is my life. Capturing moments in time. In those moments, I feel complete.

Resulting from the success of the Gratitude Portrait Series Part 1, I was commissioned by Caron, a treatment center in Pennsylvania, to create unique photographs that represent the idea of gratitude in recovery. I interviewed alumni about their experience with gratitude and recovery. Based on these interviews, I imagined a creative concept that represented their feelings. These photographs are on permanent display at the Neag Medical Center in Wernersville Pennsylvania.

Commissioned by Caron Renaissance, a treatment center in South Florida, to create unique photographs that represent the idea of gratitude in recovery. I interviewed alumni about their feelings on gratitude. Based on these interviews, I formulated a creative concept that represented their thoughts. These photographs were displayed at their annual dinner event and have since been introduced as the featured art in their new medical facility.

In the spirit of exploring new and unique ideas in photography I set out to use create this series using only techniques available in the 90’s. I played VHS tapes from popular 90’s movies on a CRT TV photographing the most notable scenes using a 35 mm film camera. I also photographed everyday scenes from the local area. Using a knife and tape I mashed the two scenes together. I separated the cyan and magenta colors creating a classing 90’s 3d image. Each composition includes 3d glasses.

I set out to create haunting images of possible ghost sightings. I photographed a number of subjects in creepy locations using long exposure techniques to give the illusion of a ghostly presence. In order to immerse the audience in the experience, these photos were introduced through a series of scary videos that set the stage for the haunting story behind the photograph and depicted the initial encounter with the ghost.

Photographed raw cow hearts on various types of backgrounds such as ice, black cloth, butcher’s paper etc., to evoke reflection in the audience. The title of each photo in this Valentine’s Day themed project was “Love Is…,” leaving it up to the audience to finish the title – for example, “love is cold.”

A photography project that delves into studies of natural beauty in contrast with man-made decay by photographing nude models in abandoned locations across the United States. I am solely responsible for all aspects of this project: coordinating with models, researching location, executing shoots, editing and producing final images, and arranging art shows, sales, marketing, and fundraising.

Won first place and a cash award in “The Naughty Show” for an image from the BARE USA collection.

Merit winner for the 2015 portfolio contest for images from my BARE USA project, earning me a two-page spread in the 2015 special-edition portfolio issue of Black and White Magazine.

Recipient of the Juror Award of Merit in the street photography/documentary category of the Grand Prix de la Decouverte International Photography Contest for my image titled “Venice Beach Study.” The image caught the silhouette of a street performer as his partner flipped him in the air on the boardwalk of Venice Beach, California.

One of four grand prize winners earning over $30,000 in a nationwide photography contest by Marlboro. The challenge was to “Capture the Unknown” through a submission of up to twenty photographs. I chose to dive into the unknown myself by traveling through Arizona, Utah, and Nevada, capturing many interesting and thought-provoking images.

A featured artist earning an interview from the arts and entertainment writer and former journalist for Rolling Stone Magazine, Sandra Schulman, resulting in a full article on my photography and photography-based art installations.

Interviewed and featured in one of the United Kingdom’s largest publications for my project BARE USA.

A featured photographer with a four-page spread in VOLO magazine, America’s number one nude art magazine. The spread focused on a photo shoot I did at the Cotton Belt Depot in St Louis, MO.

A story in the Miami New Times online magazine focused on my nationwide photography project, BARE USA. The story discussed the vision of the project and included a number of featured images.

Featured as the “Artist of the Month” in the 2013 November-December issue of Art Hive Magazine. The feature included a brief interview and various photos from my fine art collection.

I have 12 photographs from the entire Gratitude Portrait series permanently installed in the Neag Medical Center in Wernersville Pennsylvania. These images now serve as a source of inspiration and comfort for those who are detoxing from drugs and alcohol, showing them the beauty that is possible in long term recovery.

“Art Palm Beach” is Palm Beach County’s answer to Miami’s Art Basil and as such has become one of the most anticipated art venues in the area. I showed my work under the representation of ART Synergy. The work was hand-selected by a panel of judges.

Displayed 12 photographs from the “What is Gratitude” series at a fundraiser event held by Caron Renaissance. My images were integrated into a performance by “The Silhouettes,” seen on America’s Got Talent. A large number of images were sold and raffled off, benefiting the Save A Life Foundation. The photos will be a permanent fixture in Caron’s new medical facility in Pennsylvania and also offered at Caron’s New York City Gala.

Used antique View Masters for an installation as a creative solution to showing my black and white photography work. My photographs were printed on custom-made View Master reels. The View Masters sat atop an illuminated pedestal that acted as a light source for optimal viewing.

An annual event to promote awareness of the healing power of creative expression. I sold two pieces of my work, helping to raise funds for the organization Healing Through Expressive Art.

I created an interactive display for my BARE USA images. Using old shelving and some 3D images, I produced an installation that pulled the audience into the world of exploration, immersing them in my work.

“Art Boca” is one of Palm Beach County’s most prestigious art shows. I displayed my work with the representation of ART Synergy. The work was hand-selected by a panel of judges.

Ran successful Indie Gogo and Kickstarter crowdfunding campaigns that raised over $20,000 in total for the purpose of completing the BARE USA project.

Upon invitation, displayed and sold my work at the world-renowned “Nude Nite” art shows. These three-day events attract thousands of spectators and hundreds of artists interested in the general subject of nude art.

Awarded the honor of participating in the “Miami Photo Salon” exhibition, which took place in downtown Miami during the world-famous Art Basel event.

An exhibition for my BARE USA project at a popular women’s yoga studio.

Bachelor’s degree in Journalism with a Concentration in Advertising